What is a Presbyterian?

What is a Presbyterian (2) 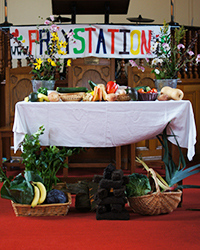 We are a small, friendly congregation who seek to serve Jesus Christ in Tullamore, County Offaly and make him known through our worship, work and words.

As with all Christian churches we believe that Jesus Christ is the only one who can give us meaning in life and make us right with God.

In the 1500s, just like today, people were asking all sorts of questions about the Church, about how their faith in God should be lived out in a confusing and changing world, and about how they should live their lives in a way that would make them happy and fulfilled.  The ordinary people felt disconnected from the teachings of the church  and they felt that  the hierarchy of  the church had  forgotten  about the  lay people and their  needs.  Martin  Luther is the  most famous  voice from  this time but in  other European  countries different  leaders were asking the same questions and finding different answers.

One of the leaders of this movement in France was a young lawyer called Jean Chauvin. He began to think some very dangerous thoughts indeed about introducing radical ideas such as democracy and lay participation into the church. He argued that the people should be allowed to vote for their church leaders (and replace them if they are no good!).

These ideas got him into trouble with the king and along with many others he had to leave France and go into exile over the border in Switzerland. In the relatively more open and free thinking atmosphere of Geneva he was able to develop these ideas and eventually teach them to others. They became known as Presbyterianism or Calvinism.

A 'Presbyterian' church is a church governed by 'Elders' (Presbyterian comes from the Greek word for 'Elders'). In our tradition, the 'Minister' or 'Pastor' is one of a group of Elders (known collectively by an old Scottish term, the 'Kirk Session' which literally means 'church council'). So leadership is shared, rather than in the hands of an individual.

So what do we believe? The Reformers summed it up using '5 alones', little catch phrases that sum up the teaching of the Bible - so we believe that God speaks through Scripture alone, that we can know him through Christ alone, by faith alone, through God's grace alone, and God does it all for his glory alone. These basic convictions are developed in documents like the Westminster Confession and Catechisms which our church holds to be a good summary of the teaching of the Bible. Dale Ralph Davis, an American Presbyterian, sums it up like this: the Bible is entirely true, sinners are perfectly sinful, God is really big, the cross is absolutely central, Grace is utterly incredible, disciples are continually secure and life is wholly holy!

Presbyterian churches also believe that local churches need to be accountable to one another. So each church is part of what we call the Dublin & Munster Presbytery, a group of churches spread across Munster, Leinster and Connacht, which in turn is one of 21 Presbyteries which make up the General Assembly of the Presbyterian Church in Ireland. So our churches are accountable to two higher bodies for what we believe and the way we do things.